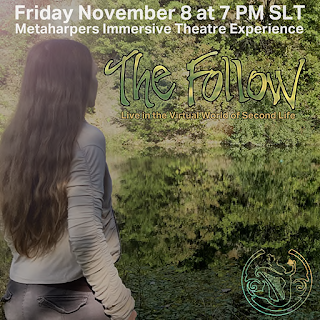 inworld landmark url: Eyefliez
That's the LM - you'll need to walk into the center of the rock...in center of the stonehenge.. type build and you will be auto-tp'd to the venue

Influenced by U2, Radiohead, and Pink Floyd, The Follow have enjoyed sharing stages with various artists such as Plain White T’s, Billy Corgan’s Zwan, & Gravity Kills. With six albums, one DVD, and hundreds of live performances,


The Follow received airplay on college and commercial radio across North America while supporting the releases by touring in the United States and Europe.

The Follow celebrates its 30 year anniversary with the release of a new album. "Wilderness" finds the band exploring more acoustic guitar-driven arrangements while the songwriting is the primary focus. The band doesn't steer away from its panoramic sound as the album takes some twists and turns with electronic effects, synth beds & organs, lush vocal harmonies, and lyrical content that's saturated by the band's career. The Follow seeks to support tours with Manchester Orchestra, Longwave, The Joy Formidable, and The War on Drugs. Current shows are in Missouri and the surrounding states, plus regular live broadcasts on the Internet.

thefollow.com  check them out here;)

This is a real Highlight, please be there right in time, the sim usually packed fast.

My very personal suggestion.......love this guys for already a long time..wwooot;)

K's world of music
I love the music, and I love to dance to it. The point when music takes over control of our minds we are there where we want to be. Some DJ's and Musicians are brilliant in serving the tunes, guiding us to an ecstasy level. If the crowd around us feels the same and we see their appreciation in gesturing, does not only lift us higher, also the DJ's getting their approval they are doing "fantastic";) I wanna thank all of them who gives me and share with me that healing and liberating state of mind.

cruising around here as well: